UPDATE (Aug. 1, 2018): Hiyasmin Saturay and Eric Tandoc and the 17 others arrested have been recently released. Saturay’s and Tandoc’s cameras, cell phones and belongings were taken from them, having suffered injuries.

VOICEWAVES EDITOR’S NOTE: The entry below was submitted by Anakbayan USA. We urge readers to please share this information that hits close to home for us here at VoiceWaves; one of the imprisoned mediamakers, Hiyasmin Saturay, is a former VoiceWaves Youth Reporter and another, Eric Tandoc, has also trained our lead staff. We urge all leaders, citywide and beyond to investigate this matter quickly and help secure the journalists’ immediate release.

LOS ANGELES — On the evening hours of Monday, July 30, more than 60 community members of several Filipino-American and allied organizations gathered in front of the Philippine Consulate to hold an emergency rally in response to the illegal arrest of 15 NutriAsia workers and four journalists at a worker’s strike. The workers and journalists were brutally beaten by approximately 100 Philippine National Police (PNP) and NutriAsia security during an ecumenical mass outside the NutriAsia factory in Bulacan, Philippines the day prior. Among the four journalists arrested include Long Beach-based community organizers and filmmakers Eric Tandoc and Hiyasmin Saturay, who were volunteering for progressive media outlet Altermidya (People’s Alternative Media Network) to cover the plight of the NutriAsia workers on the picket line.
Online footage of this violent encounter show Philippine police and guards dispersing 300 workers and supporters, using rattan sticks, metal rods, and stones. Many are now hospitalized with serious injuries. Media correspondents covering the NutriAsia picket were beaten by guards and police, who also attempted to destroy their equipment. At the rally, participating organizations condemned the brutal violence against the nineteen arrested and demanded their immediate release while advocating for the continued boycott of NutriAsia products until the workers’ demands for job regularization, employee benefits, and recognition of a worker’s union are met.

Several friends, family, and colleagues of Tandoc and Saturay were in attendance to address the crowd. “I saw the video of them being arrested and a photo of the jail cell and they are cramped like animals in elbow to elbow with other prisoners,” said Carmelita, Tandoc’s mother. “My husband and I couldn’t help but cry.  Why is this happening to them? They are very compassionate and down to earth, and their main goal for going there is to help the Filipino people who are downtrodden like the NutriAsia workers. They have been passionate about helping people and those who are suffering. They are trying to be the voice of those who cannot speak for themselves through their films and documentaries. As parents, we are deeply concerned that they have been arrested for doing their job as filmmakers, it breaks my heart to see them dragged on the ground like animals.  What gives them the right to do that? Is that how justice in the Philippines goes?” 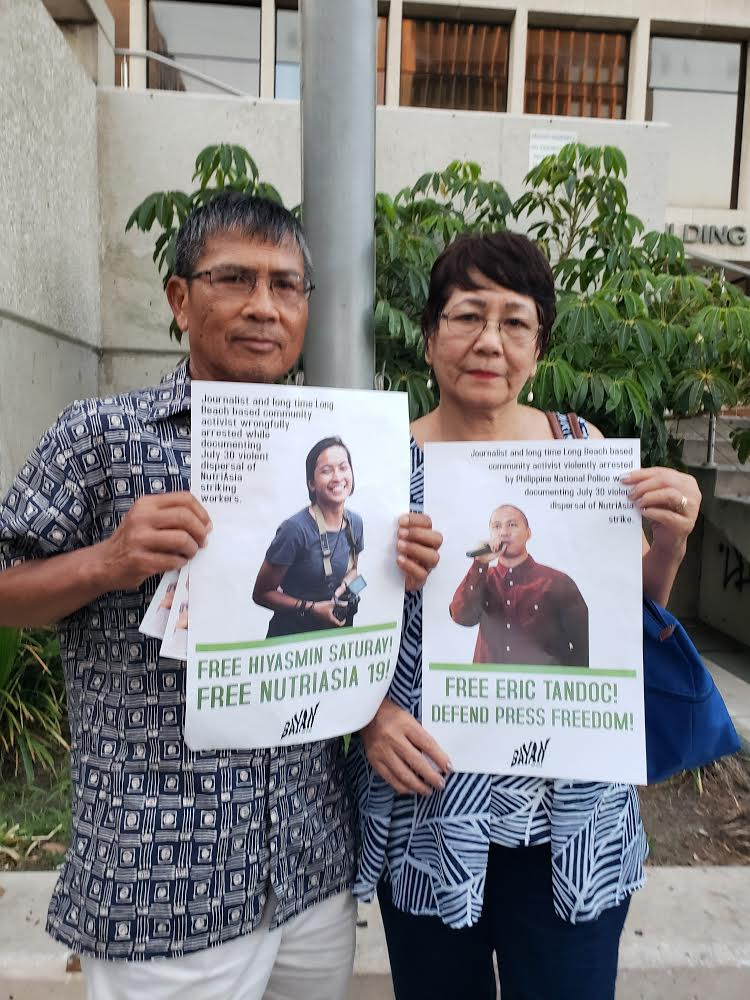 Parents of Eric Tandoc holding signs of their son and daughter-in-law, Hiyasmin Saturay in front of the Philippine Consulate in Los Angeles.

Mariell Abad, a member of Kabataan Alliance, a national alliance of Filipino-American youth and student organizations, added, “I met both of them through an after-school program of Filipino Migrant Center. They showed us, through their videos, the reality that is happening in the Philippines. Their films about bombing of the Lumad schools, about the youth in the Philippines, and about the working conditions of the Filipino workers, opened the eyes of many people and sparked the will to fight for the rights of the Filipino people. The two of them are more than mentors to me, they are my friends.”

Other speakers included Reverend Farley of the United Methodist Church and CSU Long Beach Professor Gary Hytrek, who previously worked with Tandoc through the Long Beach Coalition for Good Jobs & A Health Community. Tandoc also previously served a term with the Human Relations Commission in the City of Long Beach. Gary Hytrek from the Long Beach Coalition for Good Jobs & A Healthy Community speaks about the leadership and contributions of Eric Tandoc, one of the LA-based journalists unjustly arrested in the Philippines.

The brutal violence imparted on the 15 workers and four journalists by PNP occur in context of the worsening human rights crisis in Philippines under President Duterte, whose presidential record encompass at least 20,000 killings and harassment of the urban poor, indigenous people, and human rights activists. Since Duterte took office in 2016, targeted violence against those advocating for labor and land rights, including human rights activists, students, leaders of indigenous and farmer communities, service workers and clergy, faith leaders, and now media correspondents have increased. Moreover, Duterte has imposed policies that are seen as detrimental to the social and economic welfare of Filipinos, such as increased taxes on basic goods via the TRAIN (Tax Reform for Acceleration and Inclusion) Law, Martial Law in Mindanao, continuation of contractual and low-wage jobs for domestic and overseas Filipino workers, and more. Despite this, the Filipino people continue to call on Duterte to fulfill his campaign promises that centered heavily on economic reforms that aimed to uplift the impoverished conditions of the poor. 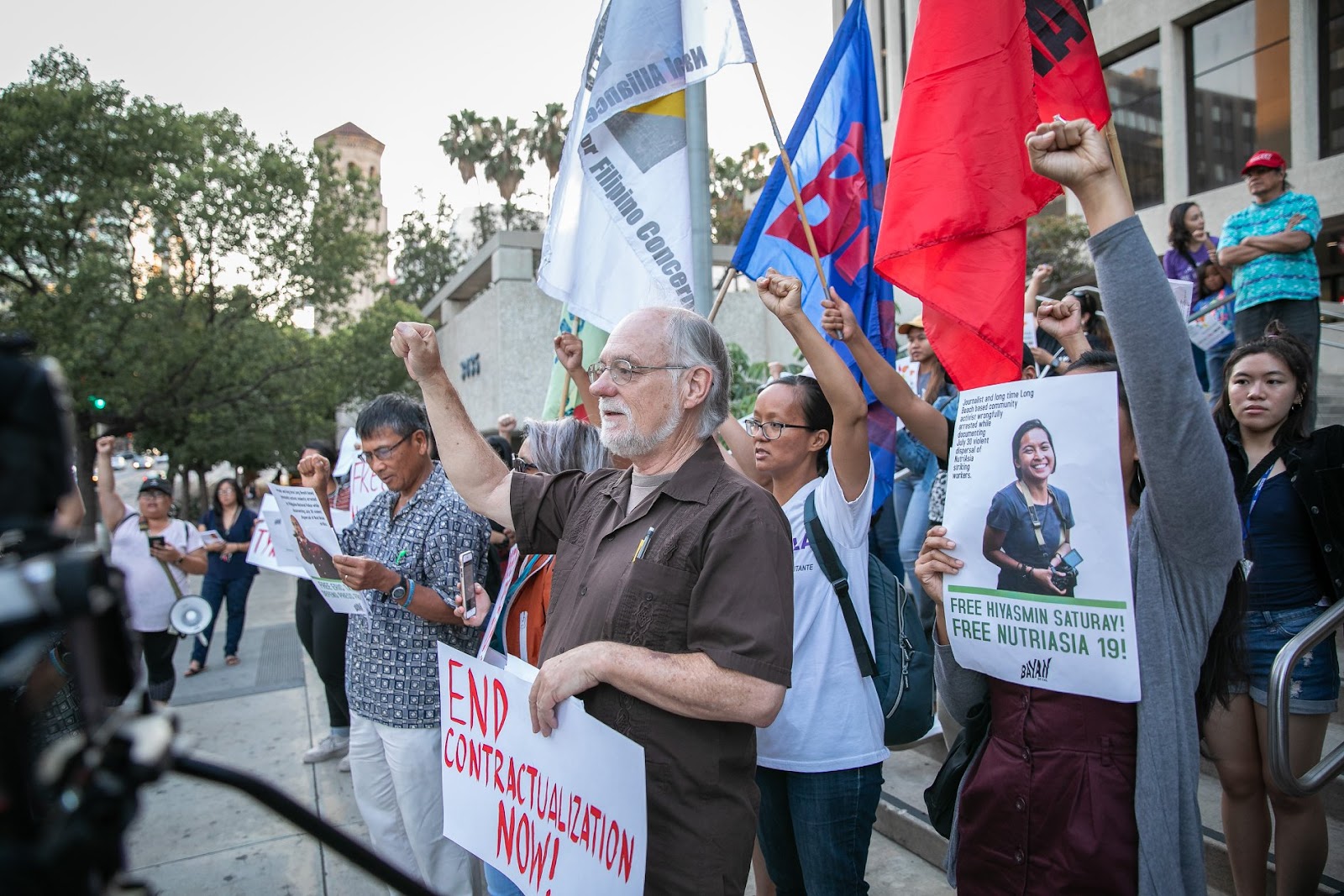 Community and family members gather at the Los Angeles Philippine Consulate to call for justice for the NutriAsia workers and the release of all 19 people arrested at the picket line in the Philippines.