A crowd follows along with a Zumba dance lesson at Pagbangon, the event celebrating the 11th anniversary of the Filipino Migrant Center. All photos by Peter Villafañe.

An emcee beamed an animated smile on stage, their amplified voice cutting through a chorus of conversations.

“Who knows what ‘pagbangon’ means?” they asked.

The question echoed throughout a sea of attentive faces, spread out among plastic cafeteria tables and neatly set up booths. As the late afternoon sun illuminated their faces with a glow, the crowd fell silent in response until one woman leapt up from her seat, jumping into action as she raised her hands above her head triumphantly.

It was a confirmation that “pagbangon” is the Filipino word meaning “to rise.” It is the act of literally getting up, or rising from being down. Her response was met with cheers.

In the case of the Filipino Migrant Center (FMC), it means rising to start anew, honoring victories and struggles.

FMC, based in Westside Long Beach, is a nonprofit organization supporting social justice causes and addressing the needs of Filipino-Americans. According to Executive Director Romeo Hebron, it is “people-powered.”

FMC celebrated its 11th anniversary, on Oct. 3, with Pagbangon: For Growth, Healing, and Community Power, an interactive health fair event held on a sunny afternoon at the outdoor grounds of St. Lucy Catholic Church.

Romeo Hebron, executive director at the Filipino Migrant Center, addresses the crowd at Pagbangon, the event celebrating the 11th anniversary of FMC.

Hebron said that FMC has grown over the years because of community power, the collective efforts of the people. The “rising” aspect of the day’s theme was to inspire people, “assuring a new day or a new moment.”

“When we were thinking of the theme for this year, we were just thinking, ‘How is our community impacted? And what have we heard being on the ground in the neighborhoods?” Hebron said. “There were a lot of people who talked about needing to come together, to heal together.”

To heal together, Hebron said people should consider what they are doing to take time, not only for themselves, but to support and appreciate each other, slow down and breathe.

Part of this collective healing process, Hebron said, was also about remembering those who have died, calling attention to COVID-19 related deaths. Hebron took a moment to honor the memory of Long Beach chef Janice Dig Cabaysa, who died in September at age 39.

The idea of healing, in the context of what FMC provides, is driven by the isolation people felt in 2020 — and “celebrating victories” in overcoming that isolation, according to Joselle de los Reyes, FMC’s direct services coordinator.

De los Reyes said working together to meet people’s needs creates a better future. Another aspect of the community healing spirit is the concept of “isang bagsak,” a Filipino rallying cry meaning “one down.”

“We want to continue our fight,” de los Reyes said. “We understand we went through all this together, but what are the next steps? How can we empower each other again?”

For people who have never organized in their community, de los Reyes said people must practice honesty when joining the “struggle for collective liberation.”

“As long as you have a belief and you have your core reasons why [you want to organize], talk to the communities that are the most oppressed,” de los Reyes said. “You’ll have a good experience. Find your best fit. Really learn about the organization and how you can see yourself committing not for a short term, but in the long term where it’s sustainable.”

This mindful healing takes time, however. Time which, Hebron said, is a luxury many do not have.

“I also think about a worker who has to work three or four jobs and who barely has enough time to even sleep,” Hebron said. “But they’re still working hard to send money back to their families in the Philippines. So for those people who don’t have the privilege of taking days off from work, how are we as a community going to stand with those workers in their struggles?”

This support, for workers and community members addressing issues surrounding economic, political and social justice, is imperative to FMC’s mission.

“I just couldn’t imagine if FMC never existed,” said Erwin Blas, a worker who spoke of the impact FMC’s help has had on his life and immigration status. “More Filipinos like me would be living in fear of deportation and the continued abuse [from] their employers because of their status.”

Erwin Blas, a speaker at Pagbangon, the event celebrating the 11th anniversary of the Filipino Migrant Center. Blas’ speech highlighted the impact FMC has on his life.

“Just this year, I got my work visa approved,” Blas said. “It’s an unforgettable moment. When my attorney called me while I was driving, he told me my case was approved. I had to stop at the parking lot because I could not control my emotions. I was crying like a child.”

Off-stage, with the stories of individuals and performers echoing in the background, several organizations and groups manned their booths. Organizers from around Southern California, from West Covina to San Diego, attended the event with offerings such as resources, education on social justice issues in the Philippines, and information about COVID-19 vaccines.

According to Hebron, FMC tailors their services and programs based on the conditions in the cities they organize in, and chose organizations that provide value to the community, many of whom offer free or low-cost services. FMC itself provides need and service based mutual aid via its Bayanihan Community Response program.

The event surpassed its initial turnout goal of 200 people, according to de los Reyes. She said approximately 300 people attended. Some community members in attendance have been involved since FMC’s first anniversary event.

Nearing the end of the event, upon reflecting on what people can take away from attending, Hebron said he wanted people to realize the power of organizing around the issues they are passionate about.

“It could be tough for people to think, ‘What good is all of this stuff? Nothing’s going to happen,’” Hebron said. “But we’ve seen that change does happen. It might take long, but it really can happen. It can happen when we organize together.”

A child rides her bike in front of the stage as Kathleen Porras (left) and Andrew Esposo (right) emcee Pagbangon.

A crowd follows along with a Zumba dance lesson at Pagbangon, the event celebrating the 11th anniversary of the Filipino Migrant Center.

A Zumba dance class, led by Nonie Belarmino, breaks out at Pagbangon, the event celebrating the 11th anniversary of the Filipino Migrant Center.

A Zumba dance class, led by Nonie Belarmino, breaks out at Pagbangon, the event celebrating the 11th anniversary of the Filipino Migrant Center.

A Zumba group dances at Pagbangon, the event celebrating the 11th anniversary of the Filipino Migrant Center. 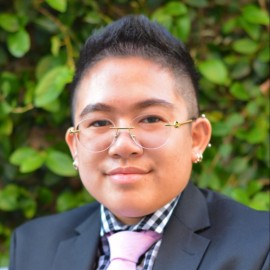